Why are we attracted to dolls?

Sigmund Freud, the father of psychology, following a German literary tradition of ‘the uncanny’ stretching back through the legacy of fairy tales, made a famous foray into this weird world in a 1919 essay called ‘The Uncanny’ (Das Unheimliche). In this essay, he explores the strange feeling that dolls create. He explains the irony that something so unsettling can come from something so familiar—a representation of us. When we encounter this feeling of unease it’s because we are in a state of confusion as to the authenticity of what we are seeing—a living doll almost.

If something that is not real, can look so lifelike, what else is not real? Our feeling of right versus wrong? Our feeling of pleasure versus disgust? This inescapable uncertainty then serves to form deep-rooted and existential anxiety within us.

In the world of science and technology, artificial intelligence is a burgeoning area that will undoubtedly and rapidly come to dominate every aspect of how we live.

This and the science of robotics, particularly pioneered by the Japanese engineers, has provided us with a more modern analysis of ‘the uncanny’ and has given rise to the concept of the ‘uncanny valley’, a term coined by the roboticist Mori Masahiro in his essay ‘Bukimi no Tani Gensho’ (‘Valley of Eeriness Phenomenon’).

In this follow-up to Freud’s original, he explores our reaction to human-like objects such as dolls, puppets, including Bunraku dolls, and mannequins.

Like the figurines found throughout the ancient world and perhaps most intriguingly in ancient Jomon era Japan, to the futuristic world of household robots that walk, talk, look and think like us, akin to the bio-engineered droids in the movie ‘Blade Runner’, dolls have and always will be full of mystery and eeriness.

They sit between the human world and the otherworld, between reality and fiction, and between the seen and the secret.

The benefits of doll play according to history and neuroscience

Dolls are as old as human civilization itself. People have created and idolized amazing varieties of dolls in all of the world’s cultures. They have typically symbolized beauty, fertility and magic and have been central to societies as sacred talismans to other worlds as well as protectors in this one.

Creating and displaying dolls is a true form of art, and the making of art is one of the true signs of civilization. One of the oldest objects we have in the world that can be considered a piece of art is a doll. The 30,000-year-old Venus of Willendorf is the most recognizable of a wide range of Venus figurines that have been unearthed across Eurasia. These dolls were vital to early communities for manifesting fertility and abundance through the universal idea of the all-providing mother god.

Even further back than these, distinctive African dolls with brightly colored beads have played and still play important cultural roles. African dolls are not just toys for young girls but used ritually as fertility charms for women and are often handed down from mother to daughter.

For the first time, a team of neuroscientists and doctors from the UK recently announced the discovery of a new study conducted using neuroscience to explore the positive impact doll play has on children. The evidence suggests that doll play activates certain parts of brain regions that would allow children to develop empathy, which is an important indicator of children’s future success, and build social skills – even when playing by themselves.

Dr. Sarah Gerson and her colleagues at CUCHDS took advantage of newer neuroimaging technology to provide the earliest indications of the benefits of doll play at a brain level in research that took over a year. After monitoring the brain activity of over 30 children who played with a range of dolls, the research and neuroscience team found that the pSTS region of the brain was activated regardless of they played by themselves or not. These study results indicated and confirmed the benefits of solo doll play were shown to be equal for both genders.

Dr. Gerson explains: “This is a completely new finding. We use this area of the brain when we think about other people, especially when we think about another person’s thoughts or feelings. Dolls encourage them to create their own little imaginary worlds, as opposed to say, problem-solving or building games. They encourage children to think about other people and how they might interact with each other. The fact that we saw the pSTS to be active in our study shows that playing with dolls is helping them rehearse some of the social skills they will need in later life. Because this brain region has been shown to play a similar role in supporting empathy and social processing across six continents, these findings are likely to be country agnostic”.

What is the science and mystery behind Blythe?

Blythe Dolls, when first released by the Kenner toy company in the 1970s, were originally targeted at children, which is perfectly reasonable marketing as almost all dolls and puppets are sold in this way. However, it turned out to be a major error that buried the brand for over twenty years before Blythe’s correct niche was realized. This correct niche is of course adult collectors worldwide overlapping with the fields of fashion, photography, art, and film. The reason Kenner got their marketing so wrong back then was that they weren’t aware of the uncanny nature of Blythe. Her eyes and features used to give an otherworldly vibe that adults love but children often just couldn’t accept or appreciate.

Blythe Dolls are a unique type of contemporary fashion doll and are more popular among adults than children. Nothing is quite like a Blythe Doll. Their unmistakable proportions, customizable features, strangely spooky eyes and serene countenance have brought them from a cult following to a global phenomenon. Blythes are also widely recognizable in art and fashion circles as an icon in the world of dolls.

Marketing departments and business people often make reactive decisions that don’t actually reflect the reality of the market or only acknowledge the temporary state of a trend. But the reality now is that now more and more parents are buying their children Blythe Dolls. Times have changed. Blythe Dolls are affordable and there are so many clothes and accessories available for them that they make excellent gifts without breaking the bank.

Maybe kids are less superficial these days. Maybe they are less conforming. Whatever the reason, Blythe Dolls for kids make great gifts and not in the least unloved by today’s youngsters.

The pleasure derived from crafting and collecting Blythe Dolls is why This Is Blythe has created so many happy relationships over the last twenty years. So if you want to immerse yourself in a greatly rewarding hobby that represents a smart investment too, then take a look at our large range of Blythes and accessories such as clothes and shoes. We understand the power and magic of dolls and we have a Blythe Doll for every style and occasion.

As a fashion doll with enormous eyes and an unmistakable haunting gaze, Blythe occupies a place in this valley and a place in our hearts.

How Much Is a Blythe Doll?

When searching, you may see nude regular Blythes starting from $49. Original release Blythes from 1972 start at $1000 because of their rarity. Any modern Custom Blythe Doll or One-Of-A-Kind OOAK Blythe Doll range from $99-$6500 depending on the artist and level of customization. If you buy a Blythe Doll today, it will most likely triple in value in a few...

Why Buy on This Is Blythe?

Every day, new customers come to us complaining that the Blythes they bought from other websites and shops smell bad and are made from cheap plastic. Since our Blythes are made with real original parts using our custom patented limbs and joints, our dolls and other products do not have unpleasant odors. They do not smell of... 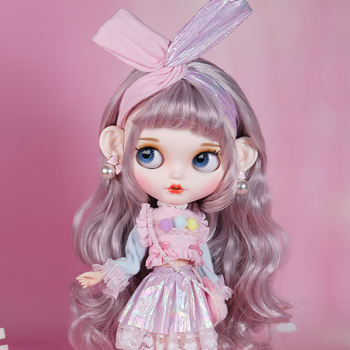 Top Reasons a Blythe Doll Is an Excellent Gift Idea

Blythe dolls, first created in the seventies are as popular as ever. Read about why a custom Blythe doll is the perfect gift for collectors, children and more.

EINPressWire recently published the press release of This Is Blythe, a global company that provides every single kind of Blythe doll product and service to all customers around the world including the United States (USA), Canada, Australia, United Kingdom, France, Germany, Sweden, Switzerland, Italy, Spain, New Zealand, Netherlands, Norway, and...

Why Buy on This Is Blythe?

Every day, new customers come to us complaining that the Blythes they bought from other websites and shops smell bad and are made from cheap plastic. Since our Blythes are made with real original parts using our custom patented limbs and joints, our dolls and other products do not have unpleasant odors....